David Chong has just finished running 1,332 kilometers (828 miles) around Iceland in 27 days. That’s almost 50 kilometers a day with no support at all, carrying all his stuff in the stroller he pushed in front of him.

We met up with him in Reykjavík shortly after he finished running the Icelandic ring road, eager to hear what inspired this American from Seattle to take on this difficult task.

Why did you decide to come to Iceland, and run the ring road?

“Iceland has been on my radar for a while now. As someone from Seattle, Washington, we have a radio station KEXP that has strong ties with the Icelandic music scene. I think that was the spark for my trip besides from all the landscape views that Iceland has to offer.

Initially my plan was to visit for a couple of weeks and do the normal drive around, take some pictures and hop back on the plane. That soon was nixed because I wanted to do something memorable that I would remember for the rest of my life. Therefore, I decided to travel to Iceland and do something I love to do – run!  It just made sense.”

David started his journey from Reykjavik on July 17th. He traveled to Iceland alone and his run around the country was unsupported as he carried his tent, his sleeping bag, food, running gear and everything else in his stroller ”Bob the stroller”.

Despite only being 28 years old, David is an experienced runner with 13 marathons to his name (a PB of 3:13).  But the run around Iceland was decided almost at the last minute and he didn’t prepare specifically for the adventure. He had run with his stroller a few times back home, but never anything like the distances he ran daily in Iceland, nor had he ever ran with his stroller fully loaded. But David possesses a fierce determination and a will to see things through, necessary traits for a marathon runner and especially for someone planning to run a marathon every day for almost a month!

The first leg was from Reykjavik to Selfoss, 50 km on one of the busiest roads in Iceland. He got there after a very long day and realized the task would be tougher and the going much slower than he had imagined. But despite having to be on the road for 10-12 hours a day David kept on running, although he admits that many times he thought of giving up and hopping onto a bus.

What was your longest day?

“My longest day was from Vík to Kirkjubæjarklaustur in terms of distance covered, approximately 73 km(45 miles). I would have to say the run from Másvatn to Systragil camp ground was the most difficult day from the standpoint of having to deal with some really bad leg issues and the heavy rain and wind.”

The shortest day was from Skógar to Vík, about 33km. His original plan was to run 40-50 miles a day, but he discovered early on that he had underestimated the difficulties. He had all his gear for the Iceland trip with him (David stayed in Iceland a whole month after he finished running) so he had to push weight he could have done without. The Icelandic summer was also unusually cruel to him!

What was the weather like and how did you dress?

“The weather was as expected coming into Iceland, days of cold rain and wind outnumbered the days of sunshine. Many, many days of rain and wind, too many to count. I wore many layers to try to keep warm and dry during those days. A good base layer, then a shell mid layer and finally a reliable rain jacket. And in Vík I bought wool mittens that saved my life.”

Where did you most enjoy your run?

“My favorite area was the eastern fjords. The weather treated me well overall, days of sunshine and the views were fantastic! It was very beautiful out there!”

David did however find the Eastfjords of Iceland difficult mentally. The road winds it ways through the many fjords, with the towns on the other side in clear view but still so far away. 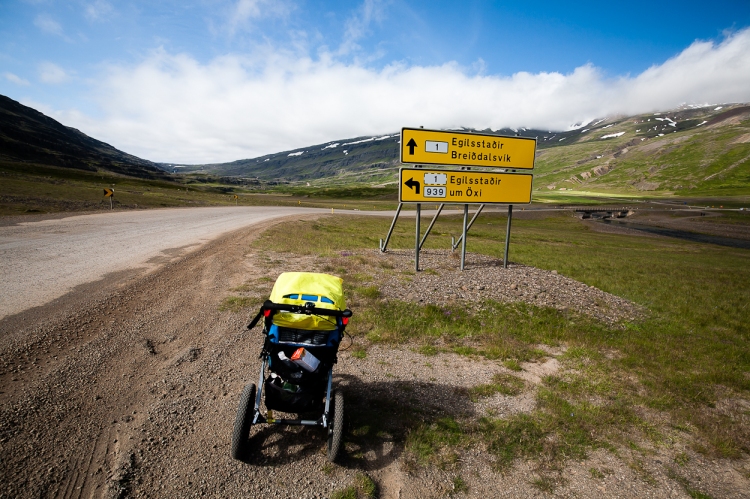 You are a very social person, wasn’t it lonely being on the road?

“I’ll admit it, it did get lonely.  This 27 day stretch was the longest I’ve been without having friends/family around me. It did however give me a chance to reflect on myself and meet many new friends along the way. Also, I ran into many others on the ring road, cyclists and campers to include a few who were always willing to have a chat!

Sometimes I met cyclists during the day then again at the camp sites in the evening, and even at the next camp site as well.” 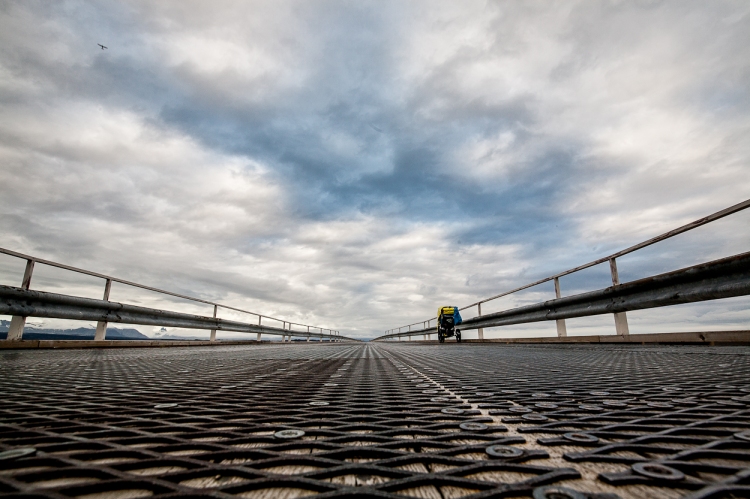 Did the Icelandic farm animals keep you company!

“Yes the horses were very friendly, so curious and at one time a bunch of them ran alongside me.  But the sheep, they are not so smart.”

For large parts of your journey the weather was pretty terrible, and you must have been cold and wet in the evenings. Where did you sleep?

“With the run being unsupported, I carried all my gear with me at all times, camping gear included. My sleeping arrangements every night was either at a campground or on the side of the road. I tried my best to get to a campground every day but only covering around 50 kilometers a day, it wasn’t always possible. Those days I couldn’t reach a campground, the side of the road was unfortunately my only option.

I’m a firm believer of leaving no trace behind, I always had a rubbish bag with me to take out what I took in.”

David came to Akureyri in relentless rain on one of the more miserable days of the summer and for the first and only time he tried to get accommodation in a hostel. However, there were no rooms available at the Akureyri Backpackers, so off he went to spend yet another night in his tent.

Tell us something strange that happened to you on the way?

“The strangest thing that happened to me occurred on the second to last day when I was coming down from the pass north of Bifröst.

It was early morning, I was coming down from the pass and was listening to a book on tape. I was running when something suddenly struck me in the head. It stopped me dead in my tracks, I was so confused. I looked forward and looked behind, nothing, no one. For a second I thought I had finally lost it, then I looked down and there it was, a small bird! The bird scurried off into the brush and I started laughing. Just imagine the odds of that happening, a bird flying into the only person around as far as the eye could see.

David’s only rest day of the whole trip was at Höfn in the south of Iceland. Just a few days after he left Reykjavík his ankle and knee were hurting badly, so he had to stop and recover. The day after he continued to his next destination, but the injuries kept troubling him for the rest of the trip.  Some days he walked more than he could run.

As the end of the journey drew closer David was getting eager to finish and despite the pain he sometimes ran longer days than before.

Sometimes he even ran very late at night, when there was less traffic and with the Icelandic midnight sun still bright.

What was the most difficult part of your journey?

“My most difficult time was running in and running out of Reykjavík, my return back to the city more so. From Borgarnes to Reykjavík the number of cars greatly increased the closer I got. Sharing the road with that many cars took a lot out of me mentally. Not only did I have to deal with heavy traffic but there was a severe weather warning that day as well. It might have been the heaviest of rain and the strongest winds that I dealt with during the entire run.”

David got to Kex Hostel in Reykjavik on the 12th August after 27 days on the road. He had planned to run in the Reykjavik Marathon, but didn’t recover soon enough.

You ran the entire ring road around Iceland, averaging 50 kilometers a day – a very impressive feat. Did you never want to try to bring more attention to yourself and your run?

“Not at all, there are people that do amazing things every day and I felt like this was something for myself to enjoy. I knew with more publicity the more pressure I’d put on myself.”

Looking back, is there something you would do differently?

“I’d compare this to running my first marathon. There were so many things I did or didn’t do that I look back at and would’ve definitely changed. The biggest thing would be bringing an extra pair of shoes. My thought process was that, as I was running unsupported around Iceland, I wanted to try to be as minimal as I could be with my pack. An extra pair of shoes would have taken up a lot of space, space I didn’t have. I’ve pushed my running shoes passed its limits before and figured I could do the same, but by the end of the run there was nothing left of them. So in retrospect, I’d make room for an extra pair!” 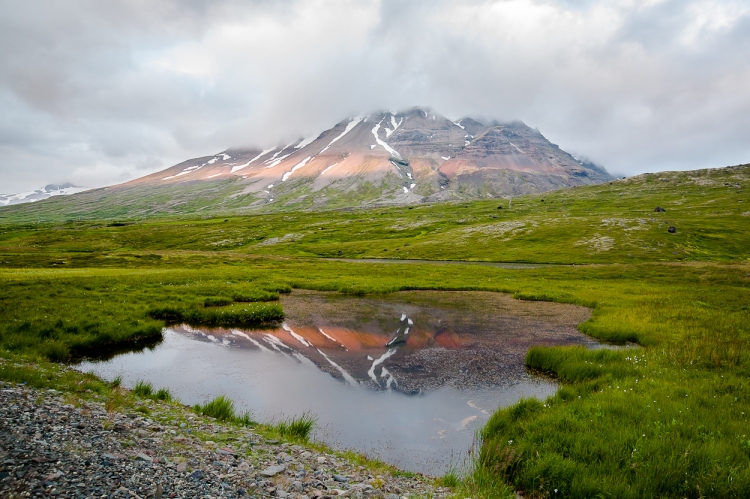 Has the trip changed you in any way?

“Absolutely, being on my own for so long I appreciate my family and friends a lot more than before. I had a lot of time to think and I hope I am a stronger and better person now.”

And finally, what are your running plans for the future?

“As long as my legs are able (knock on wood) I will be out there running. Whether or not it’s crossing countries, we’ll see. I hope to do more! A world tour perhaps, only time will tell!”