In June 2016, Running in Iceland received an email from Cathryn who manages the website Myheartscontent. Cathryn writes about being a female runner in different parts of the world and she wanted to know from Halla what it’s like to be a female runner in Iceland.   Many people have asked us about this interview, so we got Cathryn’s permission to publish it here. Comments and questions are welcome!

Please introduce yourself. Tell us a little about who you are and what you do when you’re not running.

My name is Halla Björg Þórhallsdóttir and I am a 41 year old Icelander. I have a master’s degree in Finance and work in financial advisory for an international firm in Iceland. Besides running I like to do some hiking, and in our spare time my boyfriend and I manage a website which is called Running in Iceland.

How did you get into running?

I have always been an active person and played tennis for many years when I was younger. I had been doing some running on my own but in 2008 I decided to join the running club at my local fitness center. That was one of my best decisions ever! I really enjoy going outside to exercise after sitting in the office all day, breathing the fresh air instead of going inside a sweaty gym to work out. The social side of the running club is a big bonus.

In 2010 I ran my first marathon in Budapest and since then I have run a marathon in Munich and in Lima. I have not run a full marathon in Iceland yet but that is definitely on my to-do list. I have also participated in the Laugavegur Ultra Marathon in Iceland twice which is an amazing 55km trail race. That is my favourite race and my most memorable running moments. I have run numerous half marathons and I like to participate in the local races during the year.

How popular is running in Iceland? Is it growing in popularity or has it always been popular? Or does no-one really run?

Running in Iceland has increased immensely in popularity for the past ten years. The number of running events and races has grown and new races emerge every year. Participation in the races is also on the rise. Almost every neighbourhood in Reykjavik has a running club and the same applies to the many towns outside of Reykjavik.

How popular is it amongst women? Is that a new phenomenon or have women always been keen on running? Are the genders fairly well balanced?

As can be seen from the graph below, the development of women’s participation has been very positive as number of women has increased enormously or from 50 women in 1984 to 4,957 in 2014. Even though I have only been running since 2008, I have noticed a positive change in women’s participation in the races, especially in to the longer distances. 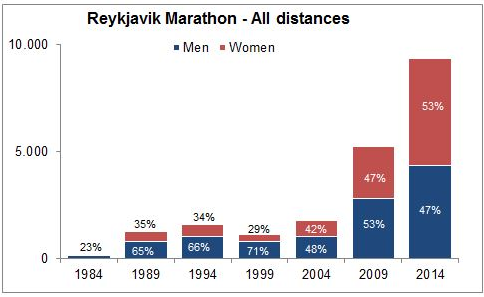 What are the biggest or most important races? What kind of distances are popular?

Racing is quite popular in Iceland and during the year over 100 running events take place. Because of the weather and light the racing season is short, most of the races are held from May – September.

The Reykjavik Marathon is Iceland’s biggest running event by far and a great celebration for all Icelandic runners – from the ones completing their first race up to the professionals aiming for medals. The most popular distance is the 10K but the race has also 21.1km and a full marathon. This is my favorite day of the year but Reykjavik Culture Night, the biggest party of the year, takes place on the same day. After the race you can see runners all through the day in the restaurants and cafes. 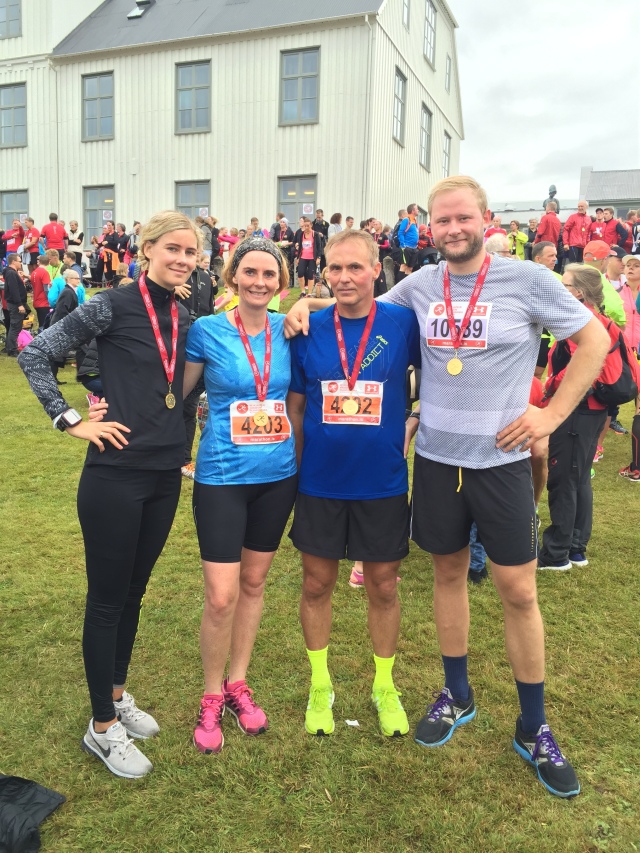 The Midnight Sun Run is the second biggest race in the Iceland. It is held around summer solstice when the nights never get dark What makes the race unique is that it starts very late in the evening, in the bright summer night. The atmosphere in this event is therefore very special and different from other races – it’s very much a midsummer celebration!

Tell us about trail running in Iceland? What are the trails like?

Trail running is gaining more and more in popularity over the world and the same applies to Iceland. Iceland is great for trail running with beautiful places and constantly changing landscape. Good trails are always just around the corner – even if you are in the middle of the city centre in Reykjavik.

Mountains, hot springs, snow, ice, sand, grass, rivers and forest are all part of the Icelandic multi-terrain trails that can be found in Iceland. The number of trail races is also increasing year by year.

As a woman, how safe do you feel when you run? Are there any particular issues facing women runners?

I feel very safe when running in Iceland. I usually go for a run after work on weekdays and on Saturday mornings and I never feel uncomfortable or unsafe. I can’t think of any issues facing women runners in Iceland and I think that the outlook is very bright for Icelandic women.

What do female runners wear in Iceland? What kind of brands are big there?

Our clothing mostly depends on the weather. In the summer months we wear shorts or capris and t-shirts but in the coldest months we were layers and winter jackets. The good thing about running in Iceland is that it is never too hot here and never too cold. The average temperature during winter months is a little below zero and the temperature during the summer seldom goes above 20 degrees Celsius. So there is just plenty of fresh air!

There are no Icelandic sporting brands available so the most popular brands are the usual suspects: Asics, Nike, Adidas, and Saucony.

What do Icelandic runners use to fuel and to hydrate?

Sports drinks like Gatorade and Powerade are the most popular sport drinks in Iceland. For longer runs it is very common for people to have gels from e.g. High5 or GU while some use natural energy bites like dates. Icelandic chocolate milk is a very popular post-run drink!

Does the weather cause any challenges to runners in Iceland?

The weather in the winter months can, of course, cause some challenges to us runners, e.g. snow blizzards or storms. However, there are very few days a year when running is impossible – given that you have the right clothing! The weather here though is very unpredictable so you have to be prepared for everything.

The conditions of the running paths are often challenging during the winter months. Many runners use yaktraks (spikes) or put screws under their shoes for safety.

Very few people go out for a trail run during the coldest months (November to March). The conditions are hard, the trails can be covered in snow or ice. These months are also very dark as the sun only comes out for three hours in December.

Who are the well-known Icelandic runners or running heroes?

The population of Iceland is only 330,000 people. The running community here is therefore fairly small and it is not uncommon to see the top runners running on the same paths and competing in the same races as the average runner.

The best long distance runner is Kári Steinn Karlsson. He owns the national record in 10K, half marathon and in full marathon. He came 42nd in the London Olympics 2012.

How big is social media within the running community in Iceland? Which are the best known blogs? Any good Twitter users we should follow? Which are the most important magazines and podcasts?

Social media overall is very big in Iceland. The most popular running site is hlaup.is which has all information regarding races, registration, results, etc. in Iceland. The running clubs have their own Facebook pages. Our website, Running in Iceland, is in English and has information about races and routes in Iceland. Being a small country, Iceland does not have any Icelandic running magazines or podcasts.

If I landed in Reykjavik where would you send me to find out about the local running routes, group runs or races there?

The best place to start is to browse our website Running in Iceland, to get some ideas about the running scene in Iceland. The website has a race calendar, running routes and information about all the running clubs in Iceland.

If you are coming to Iceland for the first time we recommend that you to go for a run and follow the “Sightseeing route” that takes you past many of the most well known sights in Reykjavik. The route goes past Harpa Concert Hall, the City Hall, the parliament (Althingi) and Hallgrimskirkja church.

My favorite routine is to go for a run, relax in a hot tub afterwards and then to a nice coffee house. Here is an article that includes three short running routes, a swimming pool and a cafe.

If I was going to do any race in Iceland, which would you recommend ?

The races I mention above, the Reykjavik Marathon, the Midnight Sun Run and the Laugavegur Ultra Marathon, are all great races with beautiful routes and great experience. Other alternative races that I recommend are:

Ármannshlaupið:
This is a 10K race on a flat and fast course that takes you along the seaside of Reykjavik with beautiful views.

Fossvogur Race (Fossvogshlaupið):
Great organization in a 5K and 10K race that is held in the Fossvogur valley in the middle of Reykjavik. The race has beautiful running paths and has been chosen one of the best running event in Iceland.

Dettifoss trail run
The Dettifoss Trail Run in northeast Iceland is probably the most beautiful and scenic trail race in Iceland. An absolute must do once in your life! The race is held in Jökulsárglúfur in Vatnajökull National Park and the route takes you along the magnificent Jökulsá (Glacier River) canyon and ends in Ásbyrgi canyon.

Pentecost Trail Race (Hvítasunnuhlaup Hauka)
Very well organized trail race with a homely feel of a small local race. The course is on trails around a lake and up and down various hills on the outskirt of Hafnarfjordur.

Four Forest Run (Fjögurra skóga hlaupið):
This is one of my favorite trail races. It is a really cozy and friendly race in a beautiful surrounding. The trail takes you through 4 forests or 1-4 depending the distance. The race is half an hour drive from Akureyri in north Iceland.

What are the best and worst thing about running in Iceland?

There are so many advantages of running in Iceland. Fresh air is one of the best thing along with these favourites of mine:

The worst thing about running in Iceland is how short the prime running season is.